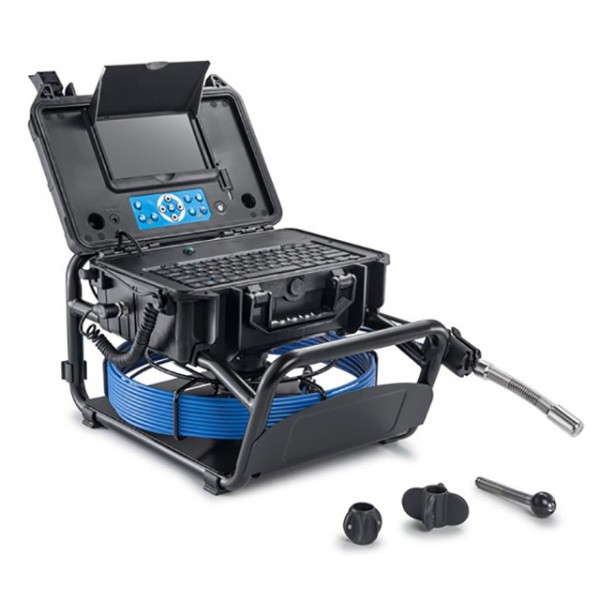 Our pipe camera meets all requirements for professional pipe inspection! It is perfectly suited for the inspection of pipes from DN 50 mm upwards. The camera head with self-leveling image is equipped with 12 LEDs for excellent illumination. The pipe camera has a recording function for photo and video, so that every pipe inspection can be documented!

The heart of this pipe inspection camera is the camera head with self-leveling image: The floating camera module ensures that the image is always displayed horizontally on the monitor. Special weights balance the camera module thanks to gravity. This means no matter how often the camera head is twisted in the tube, you always get an upright image on the screen. Nevertheless the camera head only has a diameter of 23mm! This makes it narrow enough even with a guide ball to be able to work in pipe diameters of DN50 without any problems. Thanks to the more integrated LEDs, adjustable in different brightness levels, the camera head provides you with a clear, bright image on the camera monitor that shows all details about the condition of the pipe. During the pipe inspection, make sure that the pipe is always free of waste water. If the camera head is immersed in water, you cannot see anything in the tube, even if the camera head itself is of course waterproof. If necessary, you must first create a drain of the residual water in the pipe by cleaning the pipe.

The camera head is optionally available with an integrated 512 Hz transmitter, allowing it to be located within a pipe using a locating device such as the vLoc3 locator. The camera head does not get bigger, but has the same dimensions as the version without transmitter.

The robust push cable can easily be pulled out of the rotating basket and inserted into the pipe. The special mount for the camera head at the end of the reel is slotted. This allows the push cable to be clamped in there. A light snap mechanism picks up the cable and fixes it so that you have both hands free to operate the tube camera. After the pipe inspection and during transport, the camera head is safely picked up by the camera head and protected from damage

The screen has several self-explanatory buttons that trigger different actions on the tube camera. This allows photos to be taken, videos to be taken or the brightness of the LEDs on the camera head to be adjusted at the touch of a button. In addition, you can easily play back already recorded video recordings or photos. The buttons are provided with corresponding pictograms, operation above them is child's play. At the push of a button you can also access the menu of the pipe camera, in which you can make various basic settings such as date, time, monitor settings, etc..

Videos and photos of the pipe inspection are stored on an SD card. This is located in the SD card slot next to the screen. You can remove the SD card from the tube camera and insert it directly into your computer and read it out.

Technical data of the tube camera: