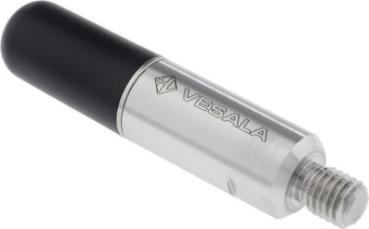 The 33kHz sonde is a small, battery-powered transmitter that actively emits a frequency. The signal from this new version can penetrate soil to a depth of 10m. The sonde transmitter is pushed through non-metallic pipes and ducts and can be located at the earth's surface with a probe locator. The sonde comes with both a male M10 thread and a female M12 thread to mount the sonde on a push cable. Alternatively, the transmitter can be attached with tape to the push cable of a pipe camera, for example. The transmitting power is not affected by this. In this way, tube cameras without sonde transmitter can also be retrofitted accordingly.

The sonde has a diameter of only 18mm with a length of 85mm. The housing is made of robust plastic and stainless steel. This ensures that the sonde is protected from external influences such as sewage. The sonde is waterproof up to a depth of 20m.