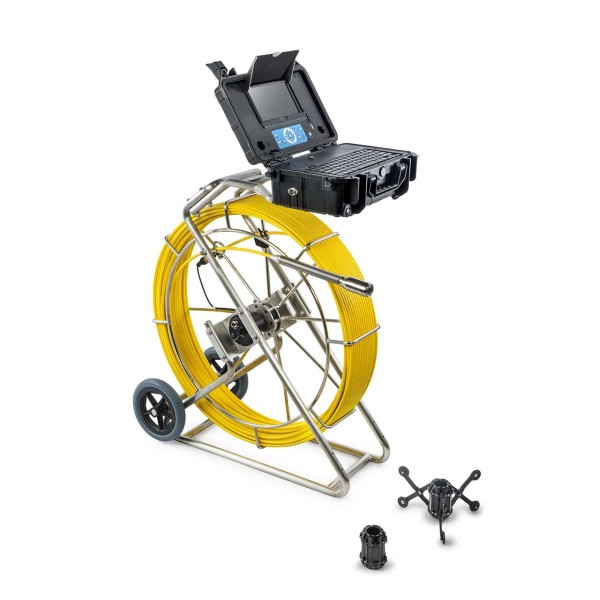 Description Product Reviews 0
Description
This pipe camera is ideal for inspecting pipes and sewers from DN 150mm up to DN 300mm. The area... more
Close menu

This pipe camera is ideal for inspecting pipes and sewers from DN 150mm up to DN 300mm. The area of application includes not only pipe inspection in sewers, house connections and downpipes, but also pipes for air conditioning systems, chimneys, downpipes, building shafts, cable ducts and ventilation systems.

The channel camera impresses with its 38mm camera head with self-righting image: The floating camera module ensures that the image on the monitor is always displayed horizontally. Special weights balance the camera module thanks to gravity. This means no matter how often the camera head is twisted in the tube, you always get an upright image on the screen. The extremely robust sapphire glass prevents the eye of the camera from being damaged or the image from getting worse due to scratches.

Thanks to the 12 more integrated LEDs, adjustable in different brightness levels, the camera head provides you with a clear, bright image on the camera's monitor that shows all the details of the channel's condition. During the pipe inspection, make sure that the pipe is always free of waste water. If the camera head dives into water, you cannot see anything in the tube, even if the camera head itself is of course waterproof with a water column of 20m. If necessary, you must first create a drain of the residual water in the pipe by cleaning the pipe. For pipe inspection with different pipe diameters, a selection of guide balls and guide carriages is included. These ensure that the camera head is guided as centrally as possible in the pipe. This not only improves the illumination and thus the quality of the image, but also prevents the sliding cable in the channel from tipping over.

The reel integrated in the camera has a yellow push cable with a length of 80 m and a diameter of 9 mm. The pushrod is stable enough to push the camera head up to 80m forward. It is wound on a portable reel made of stainless steel, over which the cable can be pulled off. A mechanical brake prevents the cable from shooting out of the drum. The reel also has a receptacle on which the case of the tube camera can be placed. Alternatively, the case can also be operated standing on the floor or in another position. This enables you to react optimally to the respective conditions on site.

The screen has several self-explanatory buttons that trigger different actions on the tube camera. This allows photos to be taken, videos to be taken or the brightness of the LEDs on the camera head to be adjusted at the touch of a button. In addition, you can easily play back already recorded video recordings or photos. The buttons are provided with corresponding pictograms, operation above them is child's play. At the push of a button you can also access the German language menu of the pipe camera, in which you can make various basic settings such as date, time, monitor settings, etc..

Videos and photos of the pipe inspection are stored on an SD card. This is located in the SD card slot next to the screen. You can remove the SD card from the tube camera and insert it directly into your computer and read it out.

Technical data of the tube camera: